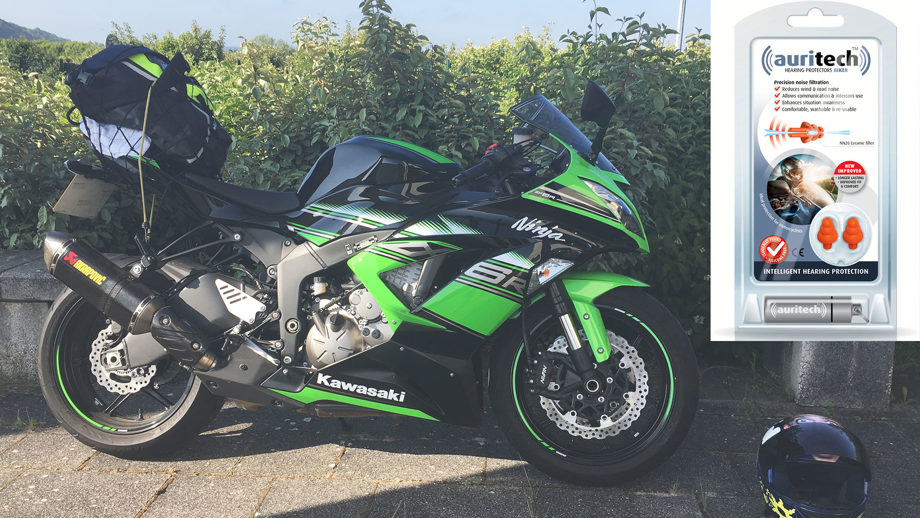 I’ve been passionate about motorcycles for as long as I can remember. I was so eager to get out on two wheels, I completed my Compulsory Basic Training (CBT) on my sixteenth birthday, and was on the road on my own bike the following day. That was nine years ago, and I’ve been riding ever since, currently on a Kawasaki ZX-6R – but for seven of those nine years, I rode without ear plugs.

It wasn’t until I had been riding motorcycles for a number of years that I decided to include ear plugs as part of my regular riding gear. It was in fact when I did my first overseas riding trip to Le Mans for MotoGP, thinking a lengthy trip required some extra protection. But before that trip, I hadn’t done many long stints on a bike, so I naively assumed that ear plugs weren’t necessary and that my hearing wouldn’t be affected.

As a newbie to wearing ear plugs, I went straight for the disposable foam plugs, not completely understanding that such a wide range of options existed when it came to motorcycling-specific hearing protection. When I debuted the foam plugs on the 420-mile trip to the French circuit, the reduction in wind noise was massive which was great, but there were three main draw backs that caused me to look for an alternative solution.

After deciding on the Auritech Biker Ear Plugs as the replacement for the foam plugs, I couldn’t wait to try them out on my next ride.

My first surprise when I tried them on was that I could still hear conversations happening around me. This is in fact to be expected. There’s a ceramic filter in each plug  allowing you to still hear the important noises around you clearly, like conversations (albeit slightly quieter than without them in), an intercom, and sirens for example, but shutting out loud wind noise.

Being able to hear other noise made such a difference especially at slow speed around town, enabling me to be more aware of pedestrians, and traffic in my blind spots, making me feel more in control. The loud wind noise at higher speed was being kept sufficiently at bay, too, which allowed me to enjoy the whole ride more than if I was wearing foam plugs, or worse, nothing at all.

The longer I spent on the bike and as the ride progressed, the more I anticipated the pain that I’d been accustomed to feeling with foam plugs. But even after a few hours, they were still as comfortable as when I set off, and the dreaded crash helmet removal at the end was totally pain-free. The Auritech Biker Plugs even come with a handy carry case to keep them in, so it’s harder to lose them, and easier to keep clean.

They really should be part of every rider’s protective equipment, and considered in the same vein as a crash helmet, jacket, trousers, boots and gloves.

Why wearing ear plugs when riding is important

Hearing damage is irreversible, but preventable. The British Tinnitus Association revealed that in the UK, 1 in 8 people suffer from persistent tinnitus (a constant ringing sound in your ears), and motorcyclists are more likely to suffer than those who don’t ride, due to experiencing loud, unfiltered wind noise when riding.

Tinnitus and permanent hearing damage is preventable with the use of quality ear plugs when you go out for a ride, like Auritech’s Biker ear plugs, which include a patented ceramic filters to ensure maximum levels of protection against dangerous levels of noise. Wearing them when on a motorcycle also increases focus and reduces fatigue. What’s not to like?