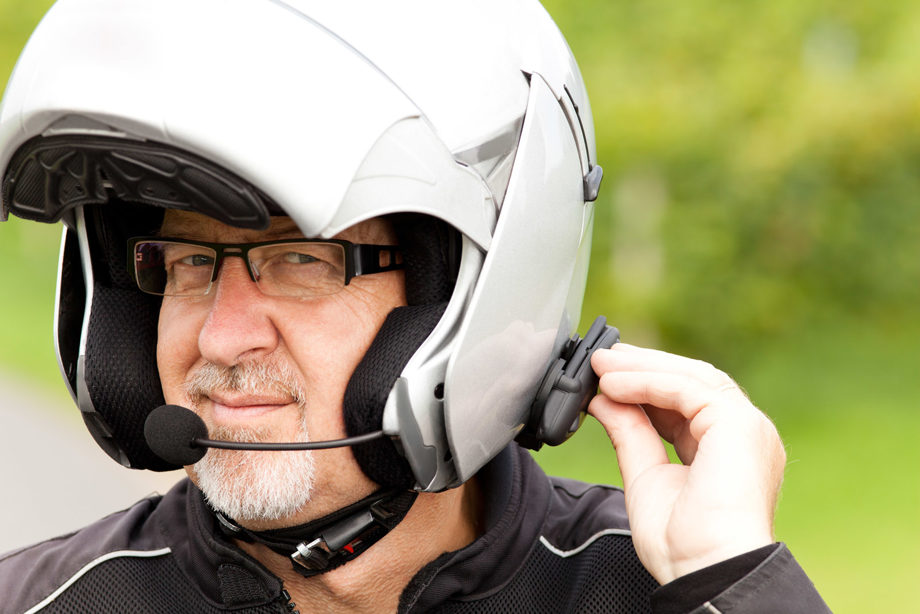 For many years, intercoms have been a popular accessory for riders who like to tour on their motorcycles.

The concept of being able to communicate with a pillion passenger, or even other riders in the group, can be a massive benefit – particularly when it comes to planning comfort breaks and fuel stops, not to mention simply whiling away the hours.

The introduction of Bluetooth technologies and other technologies like smart phones has seen a real boom in the use of intercoms and the likes. No longer are such devices solely the domain of police bikers, riding instructors and hardcore tourers. Bluetooth helmet devices, whether pre-wired or retrofitted, mean that you can easily listen to music on the go, hear your sat-nav or even take calls on the go, while still allowing that bike-to-bike and rider-to-pillion functionality.

Most helmets are compatible with Bluetooth devices, in as much as a generic, over the counter, Bluetooth system from the likes Autocom, Cardo, Sena and Interphone can be fitted to them. This will invariably mean retrofitting speakers and a microphone on the inside of the helmet, as well as a control unit on the outside. These can be great if you just want an inexpensive system to use occasionally, but the downside is that they can be a faff to set up, the installation can be clumsy and you may find that the speakers can be uncomfortable if they don’t really work well with the shape of your helmet and head. You might, on occasion, also find that an external controller will affect aerodynamics at speed, and cause awkward buffeting while riding.

But there’s a new breed of Bluetooth helmets out there which are either fully integrated with speakers, microphones and control buttons, or at least designed to seamlessly work with one of the popular systems.

Helmets like the Schuberth C4 are popular because they can be paired with an iPhone or Android device in a matter of seconds, meaning you can easily hear directions given by Google Maps, make and receive phone calls and even listen to music on the go. Others, like the Shoei Neotech have all the recesses in place for their recommended Bluetooth system, meaning you can easily add an intercom in at a later date, while French brand SHARK has created its SHARKTOOTH system, which can retroactively be fitted to a number of its helmets.

However, with these devices comes a new potential risk. Aside from the potential distraction factor caused by listening to music or taking a phone call while driving or riding, a recent survey by hearing protection specialists Auritech showed that almost a quarter of respondents who did not wear earplugs while riding did so because they preferred to listen to music or speak to others through the intercom, rather than wearing hearing protection. On top of this, several other respondents felt that listening to music while riding was an adequate alternative to hearing protection as it masked any wind noise generated while riding.

Despite any impression of ‘drowning out’, the high frequency wind noise generated at speed on a motorcycle remains harmful and risks causing irreversible hearing damage to the rider. Research has shown that riding at 62mph typically generates wind noise of 95dB, exposure to which can cause permanent hearing damage after 15 minutes, while riding at 74mph increases the harmful noise to 98dB, which can be harmful after seven minutes.

While solid foam earplugs can block out all wind noise, they are also likely to muffle or completely eliminate sound coming through the intercom system, as well as the vital ambient sounds required for safe and enjoyable day-to-day riding, such as sirens, heavy vehicles and the bike’s engine note.

What is perhaps less well known is that there is specialist hearing protection available which has been especially developed for motorcyclists. These filtered ear plugs, such as the patented Auritech Biker design, feature a small ceramic filter which has been designed to reduce the harmful high pitched frequencies associated with damaging wind noise, while letting through lower frequency sounds, like music, sirens and conversation. These allow riders to use and enjoy their Bluetooth devices on the bike, while protecting their hearing at the same time.

Bluetooth helmets continue to rise in popularity and are yet another way of enhancing the enjoyment and practicality of motorcycling for many riders. When used with proper hearing protection, they can bring a new dimension to your riding, particularly on long days in the saddle.